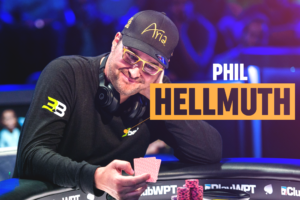 Phil Hellmuth is a Professional Poker player from the USA. His rants and tirades like “I can dodge a bullet baby” and “If it weren’t for luck I’d win them all” are well-known, and earned him his nickname the Poker Brat.

He was born in Madison, Wisconsin on July 16, 1964, and had a troubled adolescence. He battled through school, and his friends were tough on him and said he was the “ugly duckling” of his family. After High School, he studied at the University of Wisconsin and finally dropped out after three years to pursue his Poker career.

He has never looked back and is the winner of fifteen World Series of Poker Bracelets.

In 1988, at the WSOP ( World Series of Poker ) Hellmuth came 33rd. He then became the youngest player to win the Main Event of WSOP at the age of 24 by beating the two-time defending champion Johnny Chan in heads-up play.

Thirteen of Hellmuth’s fifteen bracelets have been in Texas Hold ’em, and at the 1993 World Series of Poker Phil became the second player in WSOP history to win three bracelets in one WSOP. One of those bracelets were for winning the main event. Hellmuth’s live tournament winnings exceed $23 million, and as of January 2020, he is ranked 22nd on the All-Time Money List. Hellmuth is also the holder of the record for the most WSOP Tables as well as the most WSOP clashes overtaking TJ Cloutier.

Hellmuth is known for his Brat personality, especially after bad beats and is said to take his seat at Poker Tournaments a while after they have begun. All said and done he adds a whole lot of drama to the Poker game and has achieved incredible wins placing him amongst the best in the world of poker players.