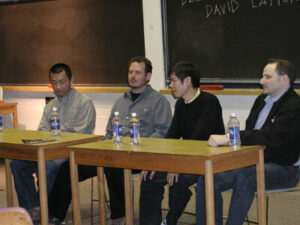 The MIT Blackjack Team are a group of ex-students and students from Massachusetts Institute of Technology, Harvard Business School, Harvard University and other leading colleges. The founding member is Bill Kaplan.

This diverse Blackjack team were well known for their card counting techniques and more sophisticated strategies to beat casinos at Blackjack globally. They operated successfully form 1979 through to early 2000.

In late November of 1979, a professional Blackjack player contacted one of the students in the card-counting group by the name of JP Massar who became known as Mr M. He proposed that they target Atlantic City Casinos where it was illegal to ban card counting.

In 1980 JP Massar heard about Bill Kaplan, a Harvard MBA graduate who had run a successful Blackjack team in Vegas for three years. He then set out to bring him on board. After observing the team, he decided to join. However, he made it clear that it had to operate as a serious business. This meant having a formal counting and betting system, strict training and detailed tracking of all casino play. The new MIT Blackjack team started on the 1 August 1980.

It was a successful team, and investors achieved an annualized return above 250%. Bill Kaplan eventually had to fall back and stop managing the team, as he could no longer show his face in any casino. He then decided to concentrate on his growing Real Estate and Development Company.

The MIT Blackjack team dissolved and players went their separate ways forming different teams. The original team may be gone, but never forgotten. Moreover, there were movies loosely based on their conquests like the 2008 film “21”, and Bill Kaplan actually appears in a cameo in the background of this movie.